The new bank was founded to meet the needs of the rapidly expanding lace and hosiery industries in Nottingham. It opened for business from premises in Low Pavement on 1 September 1865. It quickly attracted account holders, and within a month had established new headquarters in Victoria Street. A branch was also opened in Ilkeston. By December, deposits had reached GBP150,000 and shareholders received a dividend of five per cent.

The next year was more difficult. The fledgling bank struggled to process such a large volume of business. A general trade depression started to hit, and there was a financial crisis with the collapse of the London discount bank, Overend, Gurney and Company. The firm survived this challenging period and, in 1875, moved to larger premises in Victoria Street and opened a new branch in Grantham.

By 1905, deposits stood at GBP1 million and the network included 29 offices. A savings bank department was launched in the same year, but the venture was not successful. Pressure continued to mount when the London City and Midland Bank opened a branch in close proximity to the Victoria Street head office. Negotiations began and a deal was struck in November 1905, for the Midland to take over the Nottingham bank. 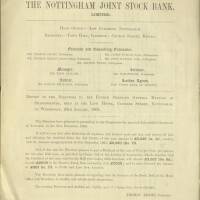