The bank’s founders – a circle of prominent London businessmen – advertised a share issue to cover the initial capital of GPB300,000. This was significantly over-subscribed and an office was secured on a corner of Threadneedle Street in the heart of the City of London. The doors opened for business in August. After a steady start, the bank began to develop a branch network with offices located in Old Bond Street, Tottenham Court Road and Ludgate Hill. It also built up an important foreign business, acting as London correspondent for 40 overseas banks and providing bill finance for international trade. Deposits stood at GBP5 million by 1887.

The bank turned down an amalgamation offer from London and Midland Bank in the early 1890s. However, it struggled to compete with larger banks over the next few years despite extending the branch network out to towns such as Croydon and Bromley. Midland Bank approached the directors again in 1898 with an offer of GBP2.5 million, which was accepted. Midland was renamed as London City and Midland Bank, and transferred head office operations to City’s prestigious offices at No. 5 Threadneedle Street. 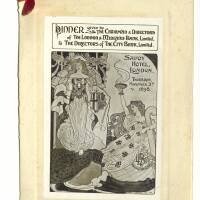