The York City and Banking Company was founded in 1830 in York, UK. It was acquired by the London Joint Stock Bank in 1909, which became part of Midland Bank (now HSBC UK) in 1918. Midland was acquired by HSBC Holdings plc in 1992.

The new bank started out with a paid-up capital of GBP2,000 and ambitions to serve local business interests, including railway-building. Deposits reached GBP62,000 by the end of the first year and the network comprised of eight branches by 1845. The following decades saw a less accelerated pace, however, rapid expansion resumed again from the 1870s. The focus had previously been on the agricultural region of North Yorkshire, but attention now turned to the iron, steel and engineering districts of north-west and north-east of England. Growth was fuelled by takeovers and branch openings. Key amalgamations included the Hull Banking Company (1894) and the Barnsley Banking Company (1896). In 1883 the bank’s title was shortened to the York City and County Bank, following the take up of limited liability.

In 1901 the York bank completed the acquisition of the Cumberland Union Bank. However, deposits were now failing to increase and profits were beginning to fall. In 1909, with a network of 187 offices and deposits of over GBP11 million, the York City and County Bank was acquired by the London Joint Stock Bank. 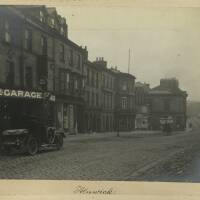