The Hongkong and Shanghai Banking Corporation (HSBC) first opened a branch in San Francisco in November 1875. The bank’s presence in the US expanded with another branch opening in New York five years later.

By the early 1950s HSBC was considering the idea of operating its own subsidiary in the country. The bank’s main focus was still Asia, but business potential in California was especially strong at that time. A decision was reached and the San Francisco branch was converted into The Hongkong and Shanghai Banking Corporation of California in 1955. The fledgling subsidiary moved from 401 Montgomery Street to new premises at 80 Sutter Street. A small network of branches was built up in the state offering a full range of domestic banking services. The bank also financed trade, maintaining close relations with export-import houses on the West Coast, from Los Angeles to Vancouver.

By the late 1970s it became clear that the subsidiary had limited options for growth across the rest of the country. Branches and trust business was sold piecemeal between 1977 and 1979. Only offices authorised to undertake foreign business were retained – in Los Angeles and San Francisco. HSBC went on to purchase Marine Midland Banks, Inc. (now HSBC USA) in New York State in the 1980s, which significantly strengthened its presence in the North American market. 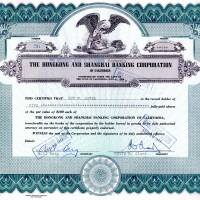