The Hongkong and Shanghai Banking Corporation Limited is the founding member of HSBC. The new firm was the inspiration of a Scottish businessman, Thomas Sutherland. In 1864 he produced a prospectus for a locally-based bank to finance the increasing flow of commerce between Asia, Europe and North America. Hong Kong merchants were among the first to support the bank, with an initial capital of HKD5 million. The bank opened for business on 3 March 1865. Then, as now, the head office was at 1 Queen’s Road in the heart of Hong Kong. The Shanghai office opened for business a month later, followed by the London office in July.

International trade was the main focus from the outset, with branches financing the import and export businesses of their customers. HSBC was a pioneer of modern banking practices in many countries. It printed the first banknotes in Thailand, for example, and was the first foreign bank in Japan.

HSBC’s reputation was enhanced by its involvement in government finance. By the 1880s, it was acting as banker to the Hong Kong government, and by the end of the century it was also banker for British government accounts in China, Japan, Penang and Singapore. It issued loans for railways and other infrastructure projects, including China’s first public loan in 1874.

The two world wars brought disruption to international trade and in the Second World War the majority of HSBC’s overseas employees were held as civilian internees. The bank was forced to temporarily relocate its head office to London, but survived these difficult times thanks to decisive leadership and the large reserves built up in peacetime. HSBC played a key role in the reconstruction of Hong Kong in the immediate post-war period. A new branch opened in the Mong Kok district to finance a manufacturing boom sparked by the large-scale movement of people from mainland China.

By 1955, the bank’s branches in mainland China had closed, with the exception of Shanghai. This left HSBC dependent on a narrow range of interests and investments. Diversification followed in 1959 with the acquisitions of the Mercantile Bank in India, and The British Bank of the Middle East (now HSBC Bank Middle East). A controlling interest was taken in Hang Seng Bank in 1965, and a merchant banking subsidiary was launched in 1972 to expand the range of services and products on offer to customers.

Attention now turned to North America and Europe. In 1980, HSBC purchased a 51 per cent shareholding in Marine Midland Banks, Inc (now HSBC USA). This nearly doubled the assets from HKD128 million to HKD243 million. Full ownership was completed in 1987. The formation of HSBC Holdings plc in 1991 created a holding company for the entire HSBC Group, with its shares quoted in both London and Hong Kong. The following year, HSBC Holdings acquired full ownership of Midland Bank (now HSBC UK), creating one of the largest financial services organisations in the world. HSBC’s global headquarters were transferred to London. The head office of The Hongkong and Shanghai Banking Corporation remains located in Hong Kong to this day, overseeing operations across Asia Pacific.

In more recent times, the bank weathered the 1997 Asian financial crisis. Lessons learned during that episode helped shape HSBC’s response to the global financial crisis a decade later. In 2007, HSBC Bank China was locally incorporated, building on growth in mainland China since the 1980s. Organic growth has been augmented by a series of alliances with Chinese financial institutions. HSBC Qianhai Securities Limited began operating in 2017 – the first joint venture securities company in mainland China to be majority-owned by a foreign bank. 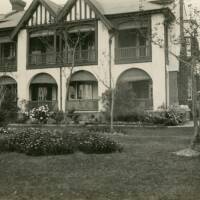 Photographs relating to the bank and local communities Records relating to research and analysis