The new bank was established in dramatic circumstances. James Foster, a local iron manufacturer, was a customer of the private bank of Bate and Robins in Stourbridge. When asked to reduce his overdraft, he reputedly deposited a barrow of coins on the floor of the bank in frustration. He then established a rival firm – the Stourbridge and Kidderminster Banking Company – with the support of local industrialists.

The new bank opened in April 1834 with a paid-up capital of GBP34,000. It had a successful start and built up strong reserves. Five branches were opened and the private bank of Tomes, Chattaway and Ford was taken over in 1835. These foundations enabled the business to survive economic challenges, as well as the reputational damage caused by a fraudulent manager in 1858.

Profits began to decrease in the early 1870s. Advances in steel production and the depletion of raw materials caused depression in the nearby iron manufacturing centres the bank relied on. The directors sought an amalgamation, and the Stourbridge and Kidderminster Banking Company was acquired by the Birmingham Banking Company in January 1880. 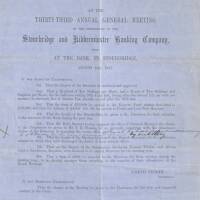