Leyland and Bullins was established in Liverpool in 1807. It was acquired by the North and South Wales Bank in 1901, which was subsequently purchased by Midland Bank (now HSBC UK) in 1908. Midland was acquired by HSBC Holdings plc in 1992.

The private banking firm was established by Thomas Leyland and his nephew Richard Bullin. Leyland moved to Liverpool as a young man and developed a profitable merchant business trading in a variety of commodities. In 1798 he was elected Mayor of Liverpool for the first of three times. As a merchant and ship-owner he helped finance at least 69 transatlantic slaving voyages. His involvement in the trade contributed directly to his own substantial personal wealth, part of which was invested in the setting up of Leyland and Bullins. Leyland become a partner in the local bank of Clarkes and Roscoe in 1802. This experience led him to start his own private partnership with Richard Bullin, who had also invested in the slave trade.

Their bank opened for business in York Street in 1807. Richard’s brother, Christopher, joined the partnership in 1815 and the bank moved to King Street the following year. There was a much later move to Castle Street in 1895, with King Street retained as a branch, operating alongside another office in Bold Street.

The business continued under the guidance of the Bullin brothers after Leyland’s death in 1827. Christopher Bullin retired from the partnership in 1847, but other family members stepped up over the years. The private bank remained independent during decades of stiff competition from joint stock banks backed by strong shareholder bases. At the turn of the century the North and South Wales Bank was looking to extend its operations in Liverpool and made an offer. It was accepted by the partners in 1901. One partner, John Naylor, went on to join the North and South Wales board.

We are continuing to investigate Thomas Leyland and Richard Bullin, in order to deepen our understanding of this bank and its links to the slave trade.

Our long history has been enriched by the acquisition of companies that reach even further back in time. There is much we can be proud of in this combined heritage but some aspects of our past are wholly inconsistent with our values. Today HSBC is committed to learning from the diverse experiences and voices that help us to create opportunities, innovate and grow. Inclusion is at the core of who we are today. We are committed to building a more inclusive world. 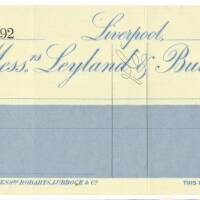