The firm’s provisional committee was made up of local businessmen looking to emulate the success of a wave of new joint stock banks, owned by shareholders, being set up in England. Significant opposition was raised by local private banks, concerned by the threat posed by a new competitor. A war of words was staged in the press, making potential investors nervous about showing support for the scheme. As a result, having advertised for a nominal capital of GBP500,000, the bank opened its doors for business in Friar Lane, having only raised GBP14,000.

The new bank offered attractive rates of interest in an early bid to appeal to customers from the industrial and agricultural sectors. The following year, the directors felt confident enough to open a branch at Hinckley, and pay shareholders a dividend of four per cent. A branch was added in Market Harborough in 1834, and the private bank of Fishers, Simmonds and Mammatt was taken over. In 1835, another private firm, Miller and Co, was acquired. The bank continued to grow its branch network and take over rivals including the Northamptonshire Banking Company (1838); Weaver and Co (1840); Middleton and Co (1878); and Hardy and Co (1895).

By 1899, the Leicestershire Banking Company was one of the largest banks outside of London, with deposits of GBP3.25 million and 27 branches in the Midlands regions. However, the directors acknowledged the need for an alliance, and negotiations were started with London City and Midland Bank. A deal was reached and the Leicester bank was taken over in 1900. 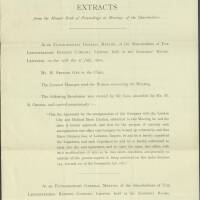 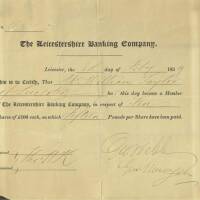