The Imperial Bank of Persia (later The British Bank of the Middle East and now HSBC Bank Middle East) was established in 1889. Its legal framework rested on a concession granted by the Shah of Persia (Iran). This entitled the founder, Julius de Reuter, to form a state bank for the nation with an exclusive right of banknote issue. The new bank was headquartered in the UK, but operated from its main office in Tehran. The initial capital of GBP1 million was subscribed 15 times over within a few hours of issue in London.

The Imperial Bank set about establishing a branch network and also purchased the business of the local branch of the New Oriental Bank Corporation. Depreciation in silver hit the bank’s reserves a few years later and initially held back progress. However, commercial customer deposits had grown steadily by the 1920s and the network had expanded to 26 branches across Persia and Iraq, as well as an office in Mumbai, India.

Persia established its own state bank (Bank Melli) in 1929, which took over the issuing of all banknotes. The Imperial Bank was renamed The Imperial Bank of Iran a few years later, in line with the renaming of Persia. In 1949 the firm was legally obliged to transfer 55% of deposits to Bank Melli, and its foreign exchange permits were withdrawn shortly after. The Imperial Bank exited the country in 1952.

To compensate for the loss of business in Iran, the bank had been opening new branches in the region, including Kuwait (1942), Dubai (1946) and Oman (1948). In all three locations the firm was the first provider to offer modern banking services. The expansion was reflected in the bank’s name. It became The British Bank of Iran and the Middle East in 1949, later shortened to The British Bank of the Middle East (BBME) in 1952.

BBME became increasingly vulnerable to takeover in the 1950s due to political unrest in the region and weaknesses in its balance sheet. It was acquired by The Hongkong and Shanghai Banking Corporation (HSBC) in 1959. HSBC lacked experience in the Middle East and so allowed the firm to retain its identity and managerial independence. The decades that followed were marked by a rising tide of nationalism in the region. The bank wound down some operations, including Kuwait and Libya in 1970, and Morocco and Tunisia a few years later. However, the development of the oil industry in the Gulf States led to continued growth and an increase in profitability overall.

In 1979 the decision was taken to move BBME’s head office to Hong Kong and general management functions were finally integrated into the HSBC Group. Falling oil prices led to a recession in the Gulf region in the mid-1980s. During this time, the firm reduced the size of its branch network and began to focus its energies on trade and corporate finance. BBME was renamed HSBC Bank Middle East (HBME) in June 1999, as part of the Group’s global rebranding programme. It had been headquartered in Jersey since 1994, although regional management was firmly centred in the UAE. In 2016 the bank confirmed it had transferred its place of incorporation and head office from Jersey to the Dubai International Financial Centre. Having played a key role in the establishment of banking across the region, HBME continues to provide financial services across the Middle East. 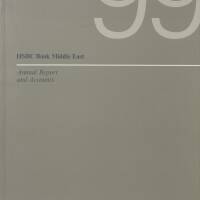