The Bradford Banking Company was established in 1827 in Bradford, UK. It was acquired by Midland Bank (now HSBC UK) in 1910. Midland was acquired by HSBC Holdings plc in 1992.

The new bank was one of the first in England to follow the ‘joint stock’ model, which meant shareholders, rather than private partners, owned the firm. The business initially occupied the former Market Street premises of the failed bank of Wentworth, Chaloner & Co. It moved to Kirkgate in the following year. Early customers included local businesses involved in the wool, worsted and iron industries. The bank also played a crucial role in the development of local railways, serving as financier to the regional railway companies in Bradford, Leeds and Manchester.

Deposits exceeded GBP2 million from the 1880s, but then declined in the early 1900s. This encouraged the directors to consider establishing a branch network, having relied solely on the Kirkgate office for almost 80 years. This option was not pursued though, and instead negotiations were started with London City and Midland Bank. A deal was completed in 1910, with the Bradford bank acquired for GBP792,880 through an exchange of shares. 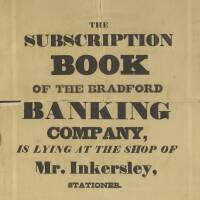